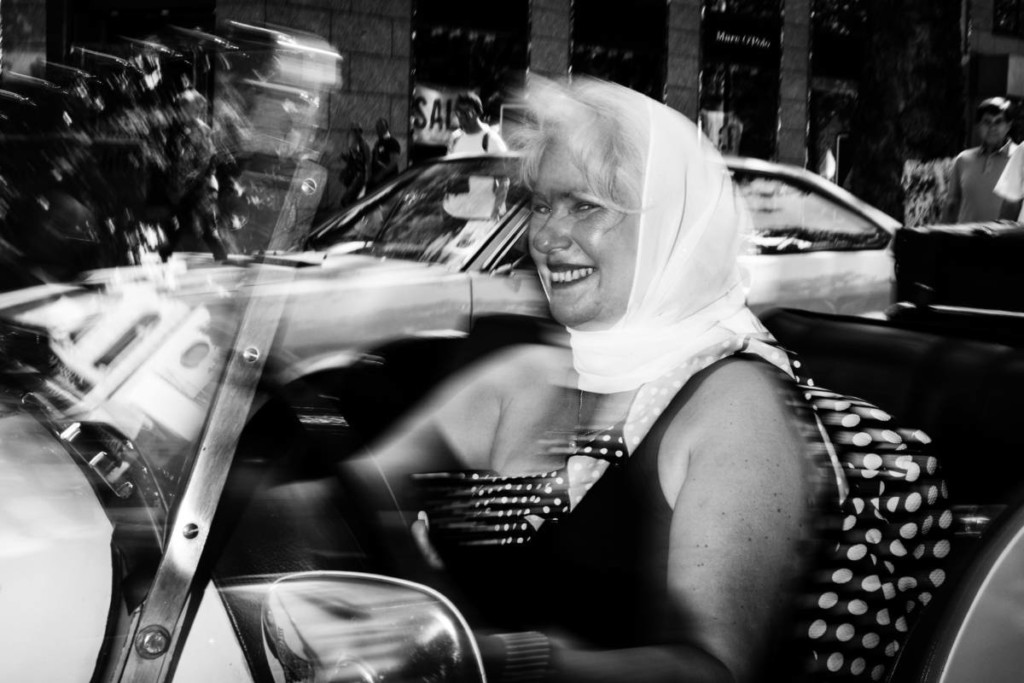 Street Photography is a sub-genre of candid photography. Candid means that you as the photographer try to capture authentic images with real people, without staging the photo. This can be a contradiction itself because it will be near impossible that you as a photographer that comes close to its subjects will have absolutely no influence on the scene. Therefore you are taking away some of its candid nature. Nonetheless, one of the highest goals should be to become invisible while photographing.

Imagine if you had this super power. You would be able to come as close as you wanted without interfering with the subjects. The fear of proximity wouldn’t play a role as well and you hadn’t absolutely no reason to miss a shot, just because you had the fear of repercussion.

Trying not to hide

It might sound contradicting, but while photographing you should try to attract as little attention as possible, while not trying to take images secretly. Hiding your camera or that you take images will only lead to the opposite.

People will notice your camera and your images anyway. Instead of having a neutral attitude towards photography, people will react more hostile. In the end, you are trying to hide something, so they will become more suspicious towards your camera.

Equally, you will become more nervous because you subconsciously know that photographing secretly will only make you look like a creep. This will result in more negative confrontations. Therefore I wouldn’t recommend you to try to become invisible by hiding your camera like a wildlife photographer hides from his prey.

Instead, photograph openly but as discreet as possible to capture candid images without influencing the photo. At first, this might sound like an impossible task. Getting close, photographing openly and getting

Getting close, photographing openly and preserving the candid atmosphere?

There are a few tips that help you to achieve this seemingly impossible triangle of goals, that I will share in the following paragraphs.

In Street Photography there are different approaches. Some photographers prefer to stand out from the crowd to receive crazy reactions and other remain silent and conservative to observe the street.

If you want to become invisible on the street to photograph undisturbed, gear definitely plays a big role. Especially in districts where normally only a few photographers can be seen, walking with a big DSLR will make you very noticeable.

I don’t know what is, but I feel that people have a special sense for big cameras and that they can notice them miles away. DSLRs of any size will also appear as a professional rig. It doesn’t matter if you “only” have a Canon 550D which is far away from being the professional’s first choice. To the normal person, every DSLR will look intimidating at first glance.

Combine this big camera with a normal lens and suddenly you carry gear that will make any paparazzi jealous, or at least it appears to the amateur eye like you are there hunt some wild Hollywood stars.

For Street Photography smaller mirrorless cameras are more suitable for various reasons. The obvious one, that they will not make you look like a professional photographer and draw less attention. They appear more “innocent” and more like a vacation camera that a typical tourist would use. Apart from the invisible factor, they are also lighter and allow for longer walks.

Smaller analog cameras are also helpful in becoming more invisible. Nowadays, only film enthusiasts use analog cameras and therefore will be less seen as an intimidating camera. Although they might attract more attention because of their dying type.

Despite the right camera, carrying additional gear like tripods, big bags or flashes will make you more noticeable. Those are not needed accessories for Street Photography. A small bag with a place for the batteries should be all you need on the street. Anything else is a luxury that isn’t necessary.

If you try to become invisible, you should dress and behave like the local people of that area. In a big city like Berlin, that attracts quite the number of tourists, it is very easy for me to dress up like a typical tourist to do Street Photography.

Nobody is worried about tourist taking images, because that is would they are supposed to do with their camera. So I can use this to my advantage by looking like a typical tourist. This means that I hang my camera around my neck with a small camera bag around my waist and I am able to blend in with tourist groups.

Suddenly, I have already become more invisible, because as a tourist I am nothing special in the area that I visit and the camera isn’t conspicuous at all. 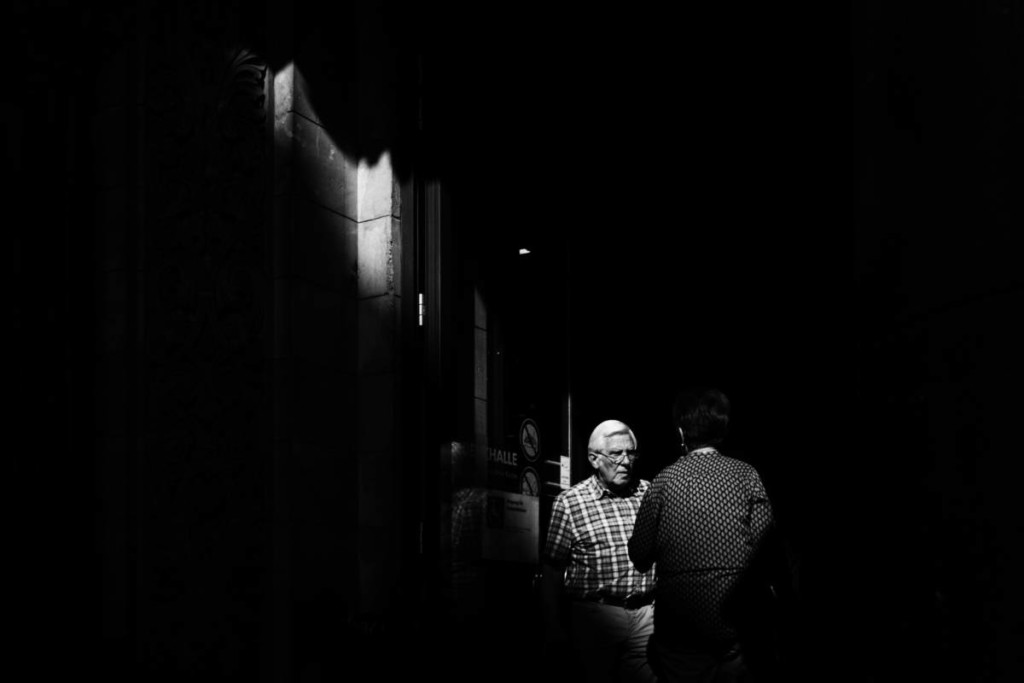 Before, I focused more on the outer appearance, emphasizing that you should look like a normal human being and blend in with the local demographic, instead of appearing like an alien photogapher.

Another aspect of blending in and becoming invisible is your behavior. Humans have a pretty good natural sense if something is out of the ordinary. They can feel if something is “wrong” with you.

Street Photography can be a very stressful task when doing it for the first time. Your mind is wandering through all the things that could go wrong. What if people notice that I am taking their picture? Will they confront me and force me to delete my picture? How do I justify that I am a Street Photographer?

Those are all worries that will make you uncomfortable if you don’t have the experience to give the right answers.

A tourist is supposed to take pictures. You probably have less fear taking images in a distant city while traveling because that is a natural thing to do.

Now you can’t always travel and being a Street Photographer is a lot less common than a tourist photographing on the street. Nonetheless, you should keep the exact same mindset that you are supposed to take images.

In Street Photography we don’t have an employer that gives us the task to photograph the street. Instead, we are our own boss, making our own rules, with our very own reasons why we are interested in documenting the human life.

Therefore you shouldn’t feel intimidated by hypothetical confrontations. You have the right answers for their questions.

“Why did we take the image?” Because we like to document the life in this beautiful city.

Easy answers to simple questions. Don’t search for excuses, behave like it is your higher duty to photograph. It is your talent, your passion the most natural thing to do for you.

The more natural your behavior is, the less conspicuous you appear and the more invisible you will become.

This won’t happen overnight, but starting the right way and not searching for excuses will make you more confident in yourself as a Street Photographer. 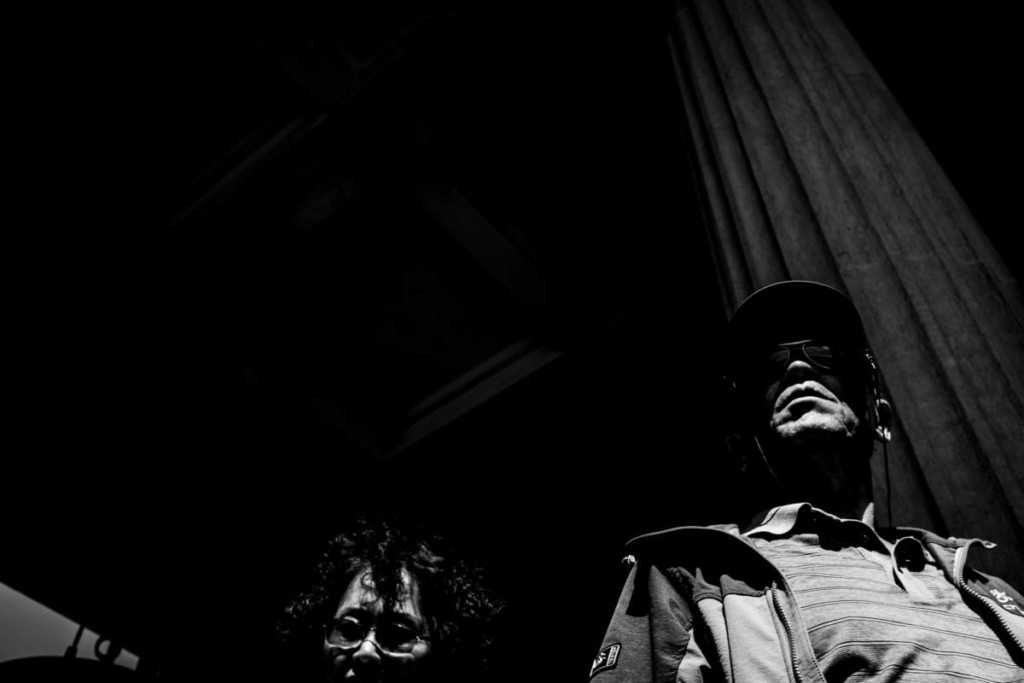 Shooting from the Hip

Although I am not a fan of trying to shoot secretly, shooting from the hip can be your last resort, if it is absolutely not possible to take pictures openly. Shooting from the hip means that you take images without looking through the viewfinder. You have to have a blind understanding of your camera and the frame to have at least a chance to compose an image.

Shooting from the Hip works best with shorter lenses because the field of view is a lot wider near the camera. Otherwise with lenses above 50mm you need to aim very precisely do capture what you imagine the image to look like. In addition to a wide angle lense, the series shooting mode of your camera might be useful to miss fewer shots.

To utilize this technique, I’d also advise you to pre-focus to a certain distance. Without looking through the viewfinder you will no chance to influence to focus accurately. Relying entirely on the auto-focus can be tricky as it might not register what you want to have in focus, as it becomes increasingly hard to frame the actual picture. Therefore, focusing to a distance of 2 meter with an aperture of f/8 will leave a very wide depth of field with most of the picture in focus.

Rather than pointing the camera directly on your subjects, drawing their attention, you can turn your attention to the background. You don’t want your subjects to be in the direct center of your image anyway, so putting the subject either to left or right third of the image opens up the field for the background.

With this technique you can basically get as close as you want without raising too much awareness and basically stay invisible. Just like any other tourist it will look like you simply take an image of the building or the place behind your actual subject, when in reality you capture both.

As you can witness, most people wouldn’t think that they are being the subject of the photo. Rather they are turning around in confusion what the interesting point of the background may have been.