‘After doing Street Photography for than two years and trying as hard as possible to become a better photographer, I guess it’s time for a short resume and what I could have done differently. Of course, nobody can start perfectly and everyone does mistakes, but you don’t need to make the same inefficient mistakes as I did. Save some time by doing it right, straight from the beginning.

Mistakes as a learning Tool

Before I begin with the list of topics I would have done differently from my point of view today, I want to emphasize that mistakes aren’t necessarily a bad thing. In fact, most of the errors below helped me to understand why certain things in the Street Photography world better

If my results weren’t as I hoped them to be, I tried to understand why my way of approaching Street Photography didn’t work. It is way more beneficial to think about these problems yourself than just copying what others do.

So take my following advice not for granted but as anchor points to make up your own mind.

… the widest aperture hasn’t to be used all the time.

… expensive gear doesn’t matter, but the right tools do make a difference.

Instead of investing my money into one or two new lenses for my heavy DSLR, that I didn’t need anyway, a new compact camera would have been way better. You don’t need a full frame DSLR, or a $5,000 Leica to capture great images. For Street Photography, a small camera that doesn’t raise much attention, like a smaller RicohGR, is a far better option than a Canon5dMk3.

… It’s not always what you see that sparkles interest, but what is hidden.

Negative space can be a good way of encouraging the viewer’s imagination. Think about the shower scene in Hitchcock’s “Psycho”. The actual terrifying part of that scene is formed in our mind, while not clearly seeing what is happening. In Street Photography we can also present such open stories. Instead of showing the scene completely, pick one protagonist and only focus on him, while leaving everything else out of the image. Small gestures can help to get the story going. 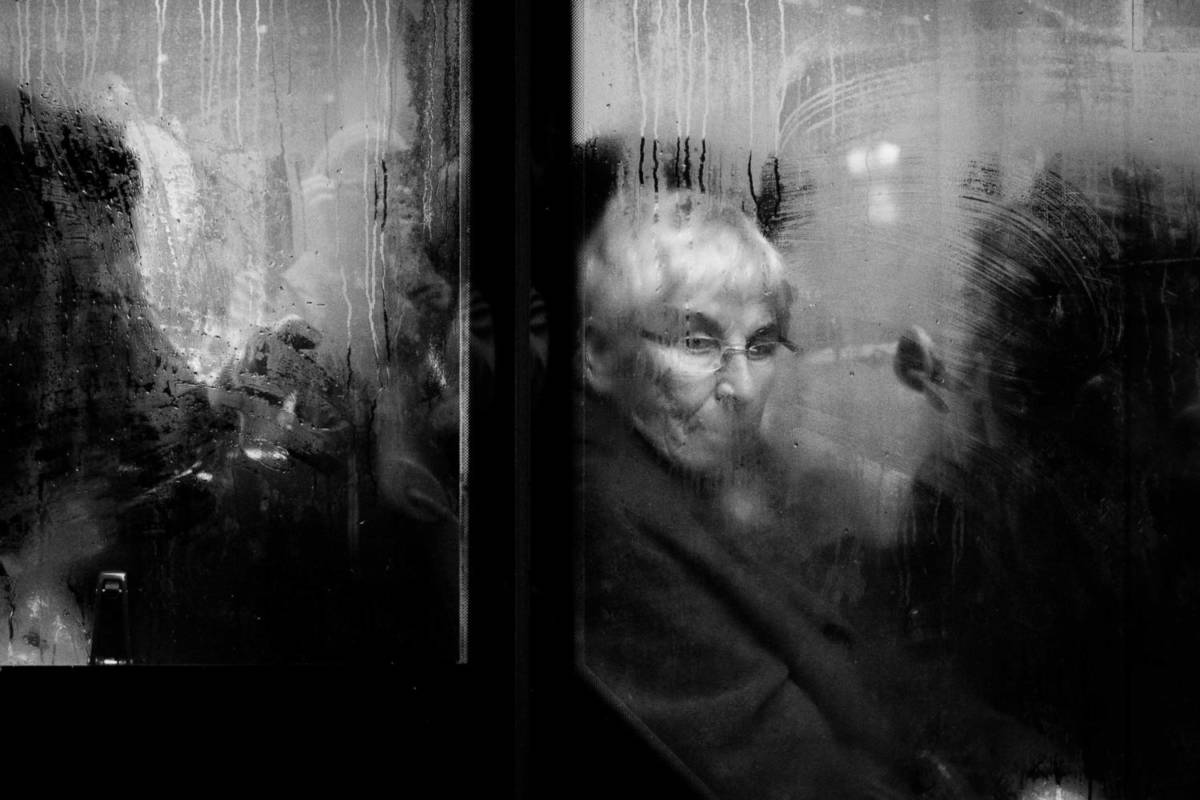 …Taking Photos is easy, Photography is not.

With all the automatic control that modern technology offers and with how well it works, anyone can take pictures. Back in the early days, photography was a privilege. Not everybody could afford to buy an expensive camera and then you had to have the knowledge of developing the film rolls. With digital technology and smartphones, we have a surplus of images. Exposure and focus can be controlled by technology, but that isn’t the essence of photography. The true art arises through composition and storytelling. Photography is not about the depiction but telling stories.

You could be the best Photographer in the world, but without enough patience, you won’t survive in the unforgiving environment of Street Photography. Even the best Street Photographers can go days or weeks without a good picture. Don’t go too hard on yourself when hitting a streak of unsuccessful photo walks. On the other hand, patience is also needed when looking for the right image. When seeing a great background, waiting for an hour or more can be worth it. The difference between mediocre and good images is not always the ability of the photographer, but the work they dedicate into that single picture. Instead of rushing from scene to scene, take all the time you want and wait until you got that perfect picture, don’t be content with mediocrity.

The judgment of our own images is pretty distorted. While on the street, looking at our latest shots, we still have all the emotion attached to the image, so we might feel like we got the next money shot, although they are a lot of flaws present. Arriving at home and seeing the image for the first time on the screen, the emotions are still present and don’t allow us to judge this image objectively. Only after a while, we are able to detach yourself from the image and to gain a neutral perspective.

… Inspiration is important, copying is not

I started Street Photography because of all the interesting pictures I saw all around the world. I learned a lot by recreating some of these images. Why certain compositions work only one way and not another. But right from the beginning, I should follow my own ideas, no matter if they feared that they wouldn’t be popular. Create the images you want to see from the start. Just because you might be not the best photographer yet, doesn’t mean that your ideas are not worth to realize. Look at other’s images to get ideas that you might implement in one of your pictures.

… Days without a keeper happen often

Like I already mentioned, Street Photography is a very ungrateful genre. You can put all your heart into days on the street trying to capture the perfect moment. All the work doesn’t automatically translate into great results. There is still the random factor that might decide if your hustle was successful or not. In general, you shouldn’t focus on the results too much. The process alone should already be totally worth the work you put in.

… Luck is important but forcible

To expand a little more on that topic, yes you might totally have a streak of bad luck, but you can also work towards your own luck. If the first picture wasn’t convincing, don’t make bad luck responsible for this. Work the scene to get a few more shots you can choose from later. If you believe that nothing interesting happened that day, it might also be advisable to seek some inspiration or train your photographic vision. There are countless possibilities to get creative on the street.

… The closer I get, the more invisible I am

While shooting with my 50mm lens (85mm full-frame equivalent), I was very shy in getting closer. So I shot from a distance hoping that nobody would notice that I take pictures. Astonishingly, the opposite is true. The more I try to hide my camera, the more I will get noticed and asked about the pictures I take. Don’t try to hide your true intentions, be open and self-confident about Street Photography.

… I should act as if you belong

Photographing in public was very nerve wracking for me. I always felt as if everybody was looking at me, because of my camera and that I was the focus of attention. First of all, this isn’t true and just a false perception. Some people might be interested in your camera, but most couldn’t care less. Only when they sense your nervousness, they will become more suspicious. If you don’t feel like a complete Street Photographer yet, just pretend like you are the greatest. It might not work from the start, but your sub-consciousness plays a big role in how people perceive you and how they react.

These are some of the mistakes I made when I started out. You can either ignore all these advice and work yourself through trial & error to become a better Street Photographer, or save a little time and money by benefiting from the experience of others. A lot of these tips shouldn’t be taken literally.

A lot of these tips shouldn’t be taken literally. I learn a lot by reading about new topics that I am interested in. But to fully understand the points I made earlier, I’d need to make these mistakes on the field too. Maybe you are this learning type too?

When you feel unsure about the points, take them as a practice guideline.