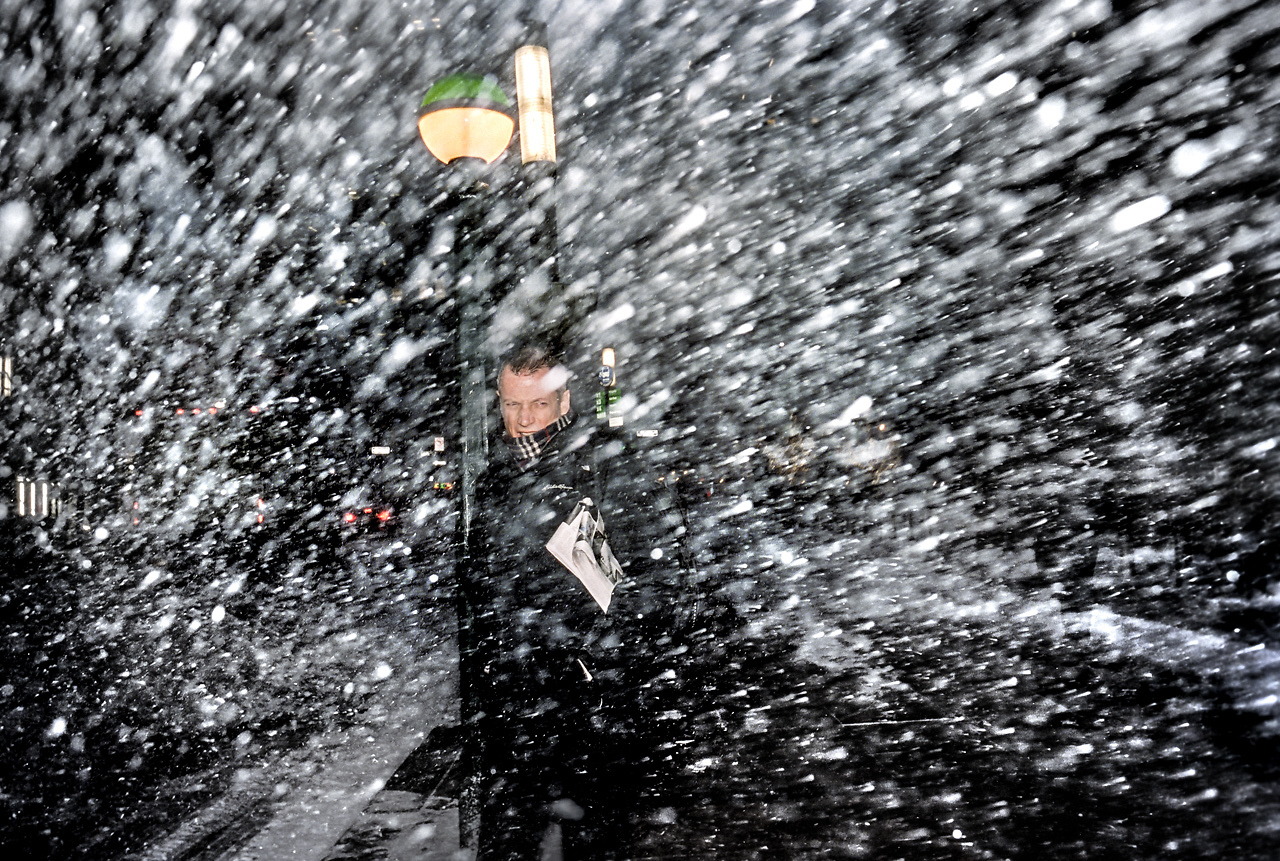 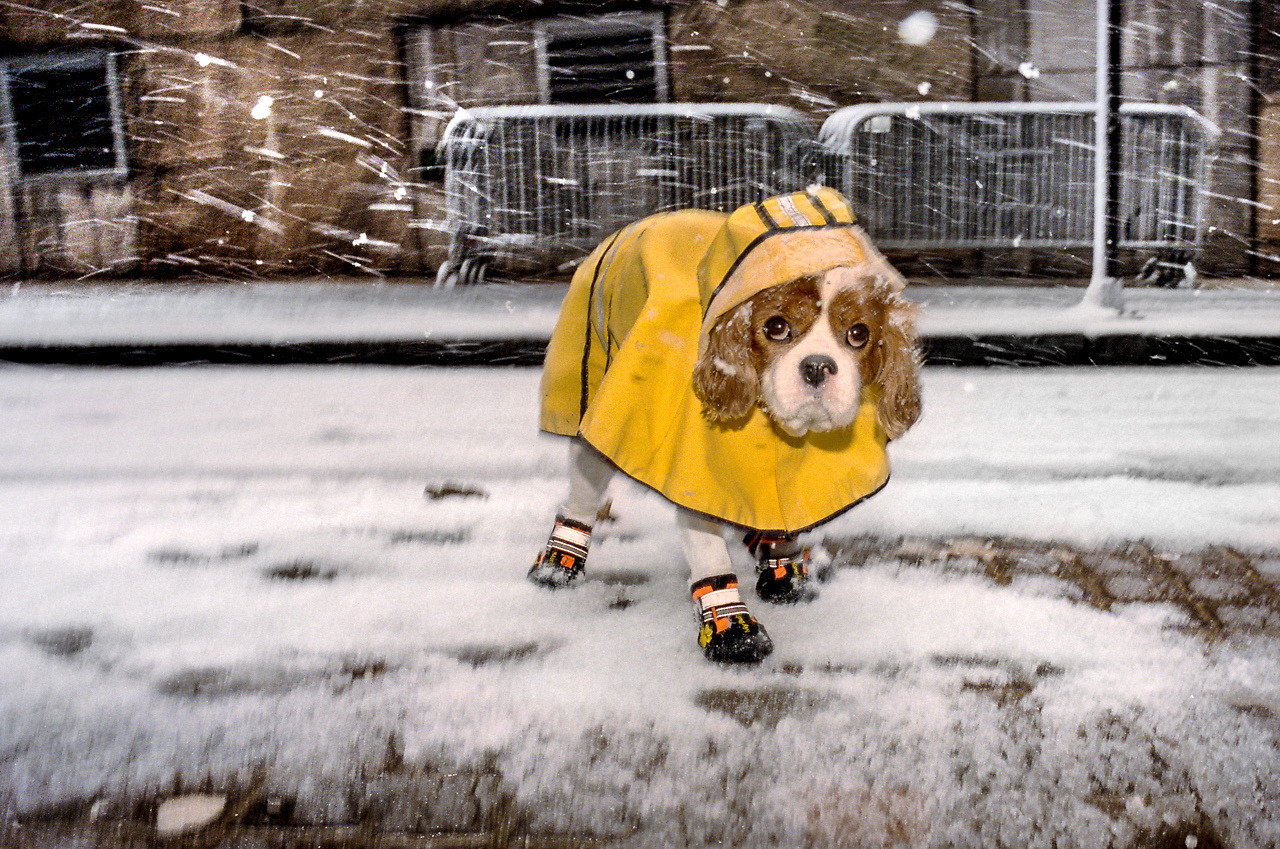 The winter is probably my favorite season to shoot in the street.  I love how the low barreling sunshine and super long shadows of the short days interact within the narrow corridors of Manhattan.  There are so many ways that the shadows and natural contrast can be used to create unique photographs.  It is a season for thinking outside of the box and letting your juices flow.   In this vein, about six years ago, I did some light shooting in a couple of the snow blizzards that we had in NYC. 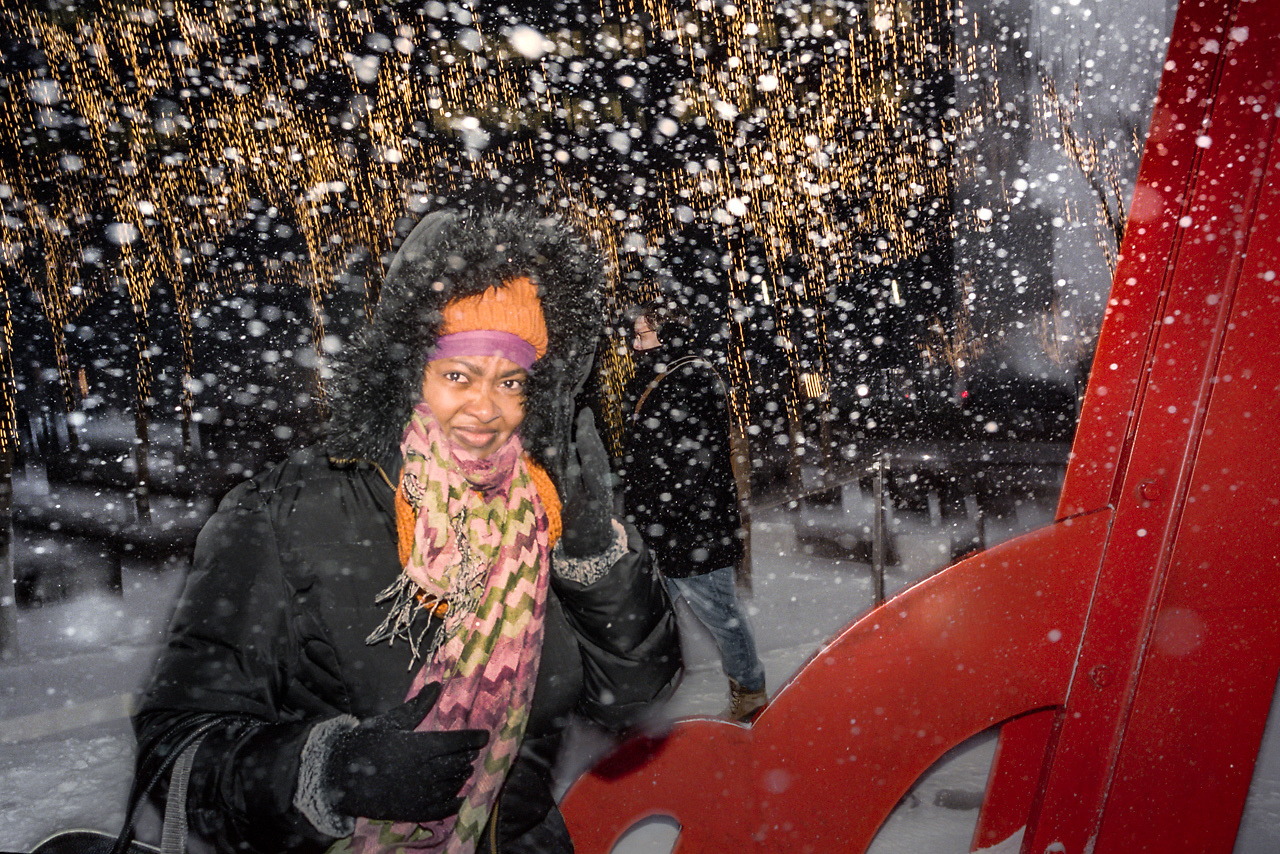 I am fascinated by how New Yorkers – many of whom are woefully unprepared – hurrily scuttle around the City while trying their best to navigate the slippery ground, blinding snow pellets and strong wind.  I love how the snow, often shifting the axis across which it flies around the air, forms a veil in a myriad of different patterns over our beautiful city.  It is all so surreal.  After observing the mayhem first hand,  I was naturally drawn into the action and fell in love with shooting it! 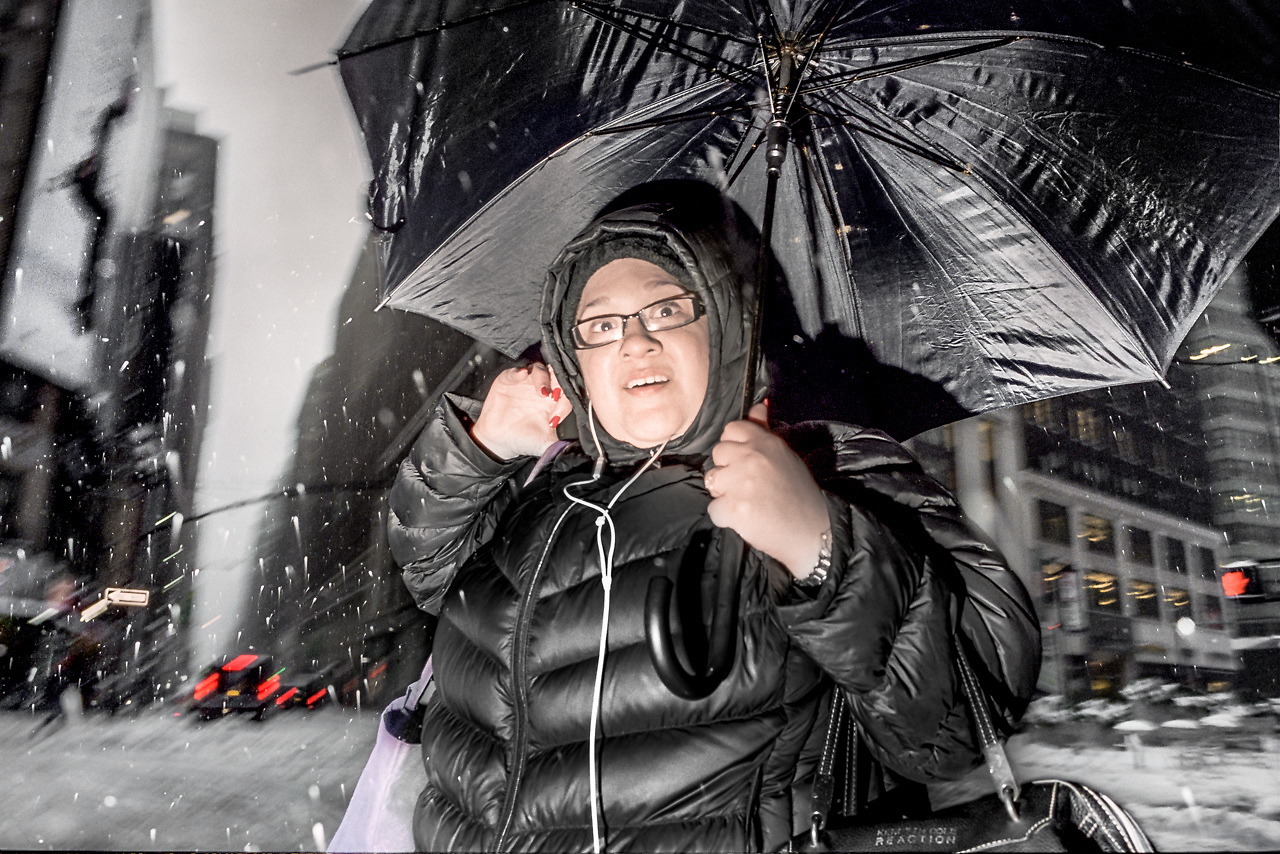 At first, I was somewhat intimidated by the strong wind and cold, wet snow.  I didn’t know how my camera and lens would handle these extreme elements for prolonged periods.  In that first blizzard, I took plenty of cover and shot very conservatively.  I instantly fell in love with the results, although they did not resemble the “up close and personal” approach that really defines my style.  After a little more experience under my belt, I realized that my Leica gear withstood the moisture and cold just fine (knock on wood!), and I consequently garnered more confidence in my gear’s ability to withstand the elements. 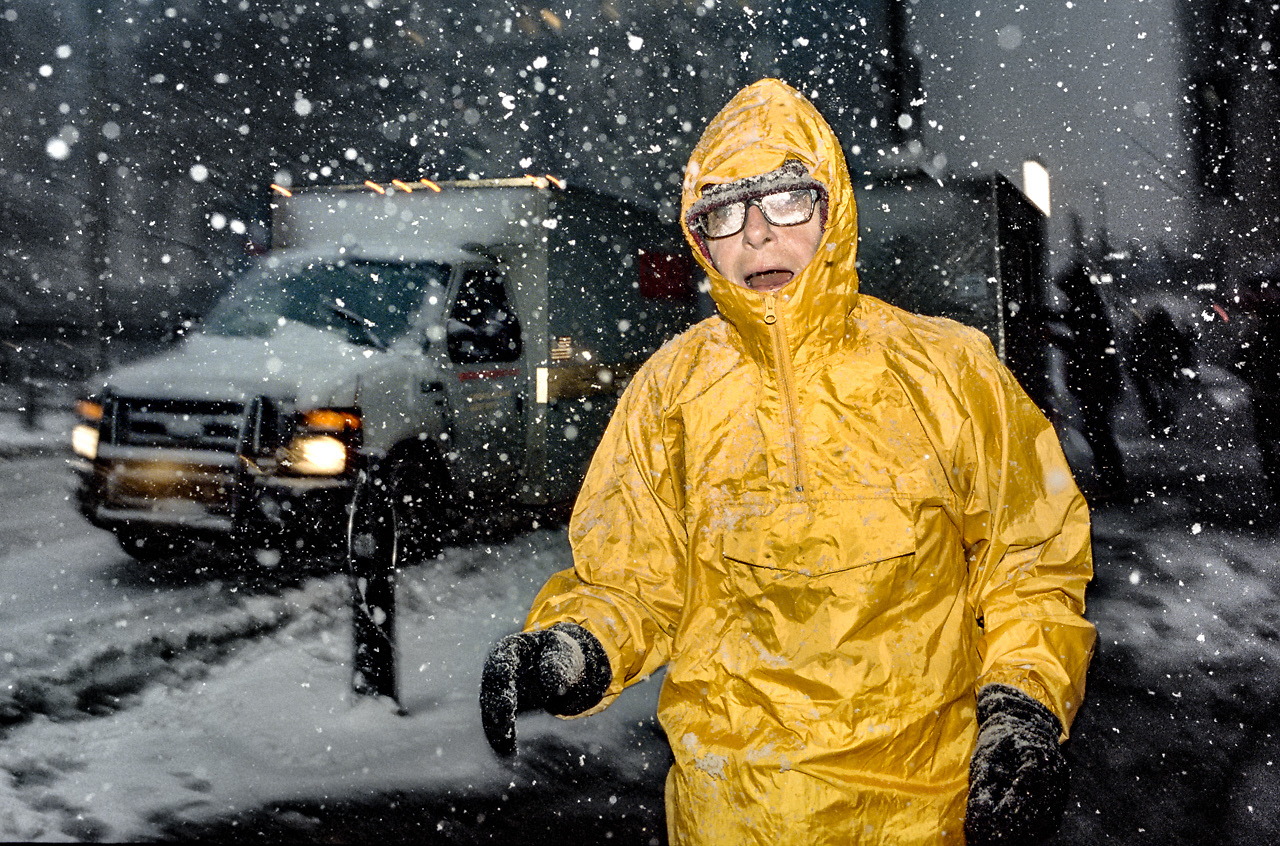 Since freed of my initial inhibitions, I have been able get out in the middle of the action with the “up close and personal” style that I love and for which I am most known. I am now in my 7th blizzard season and my enthusiasm for my project continues to grow and develop!

My general approach is to seek out people who look interesting to me, get up as close as I can while still maintaining some context and shoot them in a total candid fashion with a pulsating flash.  I seek out interesting expressions, the behavior of struggling through the extreme wind and annoying snow pellets, a particular fashion statement (or lack thereof!) or anything else that embodies New York City.   I use only film for this shooting.   I really love how film adds that three-dimensional look to the images.  Lots of details are captured in the background beyond the reach of the flash, yet they are rendered differently – namely less saturated and even painterly –  than the main point(s) of focus.  I find the juxtaposition of the main subject(s) and background very special and something that really sets my images apart.  I often incorporate a sense of motion in my images as the result of the slow shutter speed that I am pretty much forced to use due to my on-camera flash, which does not have a high shutter speed sync feature. 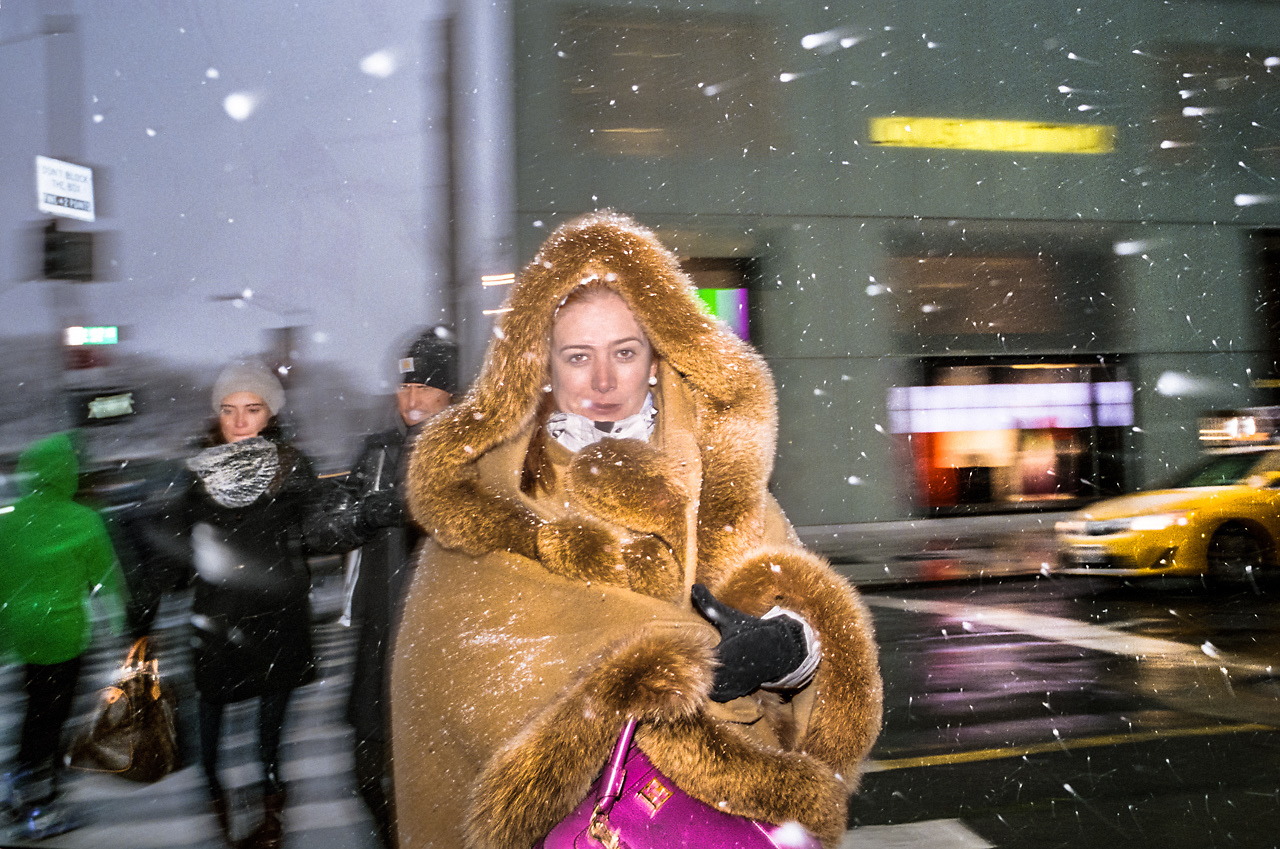 Thus, the fastest shutter that I can use is 1/45.  This is quite slow;  however, I have in many ways turned this from a weakness into a strength.  With the use of the flash and a good zone of focus, my main subjects come out acceptably sharp even when I shoot while my subject and/or I am in motion (which is typical).   At the same time, the residual motion that often appears in the background helps capture the surreal energy of the moment.

I use Leica film rangefinders because, in addition to the exception build quality, I have total control over what I am focusing on and what my shutter speed is.  I use the M7 for the snow because I find that the internal electronics pair very well with the flash (although I don’t use the internal meter).  At one point, I used my older non-electric Leica film Ms.  However, I experienced too many misfires of the flash and consequently stopped using them.  As for the lens, I typically use an old pre-aspherical Leica 28mm Elmarit as it is relatively low contrast, great for film and not too expensive to replace if it freezes or drowns to death!  I use the Leica SF-24D flash, which is the entry level Leica flash.

I am always up for shooting with people, whether locals or visitors.  I can be reached through my Facebook and Instagram  accounts as well as my website (www.adammiller.nyc). 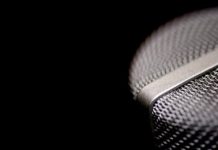 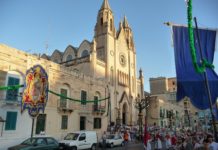 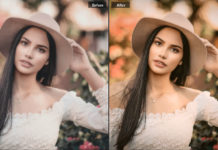 5 Tips on How to Enhance Photos in PhotoWorks – No Skills Required! 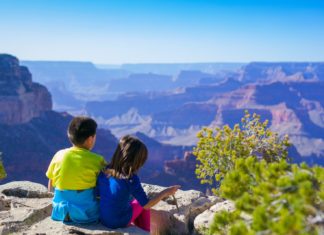 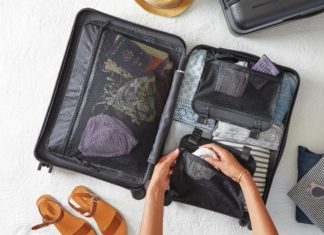