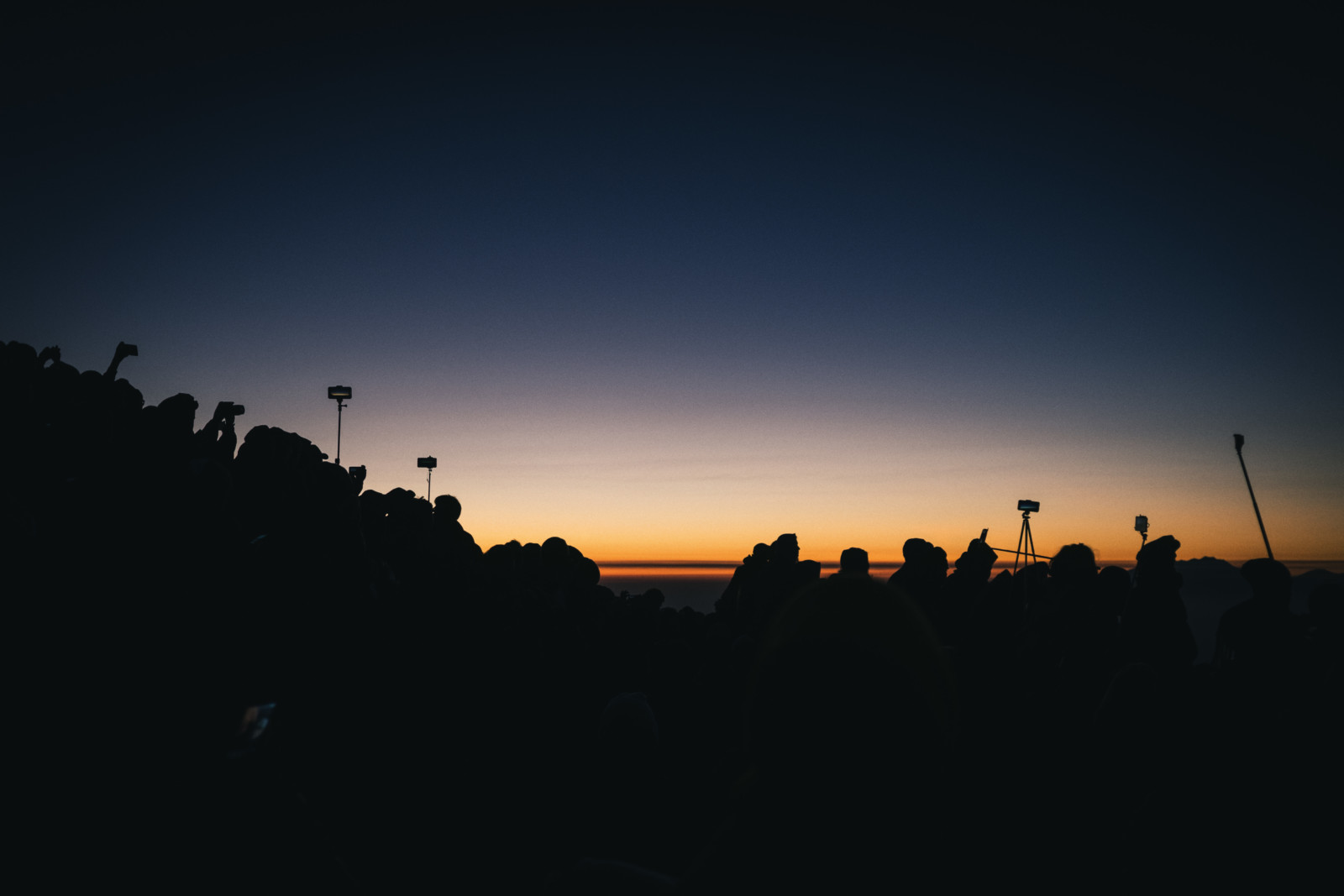 Currently, I am still in Indonesia in a small town called Malang. Although small might be an understatement with its more than 750.000 residents, it is smaller in the scale of cities in Indonesia with the region of Jakarta being home to more than 30 million people.

Coming from Berlin, it doesn’t feel like a smaller city though there are a lot of exciting experiences for me as a photographer. Taking some steps further from Street Photography, I am more interested in exploring some new genres or just doing my kind of photography.

On the top lists of activities in East Java is visiting the Mount Bromo. Similar to the Mount Ijen, Bromo is an active volcano and left its marks on the region. It is a very popular spot to witness the sunrise and at the last weekend, it was also my first time seeing the sunrise there.

Following are my impressions from this short trip and how beautiful the nature of Indonesia is.

The Trip to the mountain

For travelers that are trying to cross the Java island coming from Jakarta, there are basically two ways of visiting Mount Bromo. You can either go from the northern side to Surabaya and Pasuruan or explore the island on the southern route through Malang. 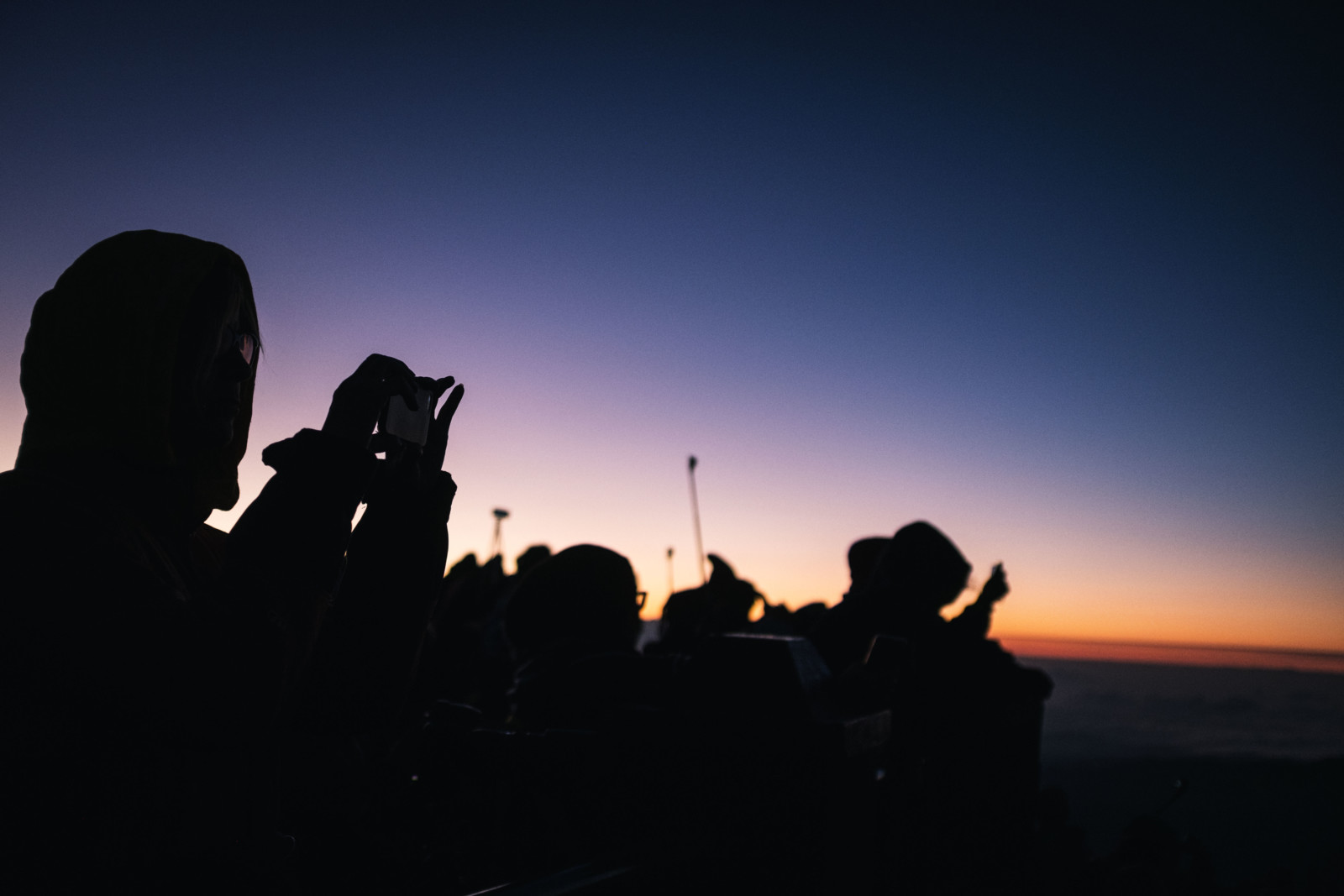 Although I am currently living in Malang, we visited Surabaya the day before and decided to spend the night as close to the mountain as possible. Sunset is early in Indonesia and the darkness can be a little frightening and unusual when it already is completely dark at 6 pm, compared to the longer sunny hours in the northern hemisphere during the summer.

If You are driving Yourself, You have to factor this in, but in general, it is a good advice to avoid driving at all. The roads are not in ideal conditions and the driving style of the locals can be a bit “unconventional” compared to Western standards.

Staying near the Mountain

If You want to see the sunrise, You have to be there early. To save some time and get at least some sleep, we decided to stay in a very local village as close as possible to the mountain.

We were welcomed in a homestay that was very basic and might not be up to western standards, but since it was only for one night, it was survivable.

The advantage was, that getting up around 2:30 am at least allowed us to get some hours of sleep before heading to the mountain.

Getting there early isn’t only recommended to view the sunrise, but also to get some of the best spots, as You will see in the following pictures, there are a lot of visitors.

From the small village, it only took around 30 minutes to reach the next station near the top. Quite surprising was the amount of traffic that reminded me more of some of the busier places and not what one might imagine from a sunrise of a mountaintop.

You can not drive to the top on Your own and have to book one of the jeeps that are driving there. The good side is, that there is a lot of space, which makes the drive more affordable.

Why the jeep is needed, You will see in later pictures.

At the top, there was already a huge crowd trying to get the best spots to see the sunrise. Not only tourists but also a lot of Indonesians are interested in seeing the sunrise.

Since it was on a weekend, I would definitely recommend going there during the week and hope, that there are fewer people. You can see, there were a lot of people trying to get a shot with their selfie-stick and even drones were surrounding the mountain blasting their noise into the air.

It didn’t have anything close to the remote event I was expecting to see and was a mass tourism event. 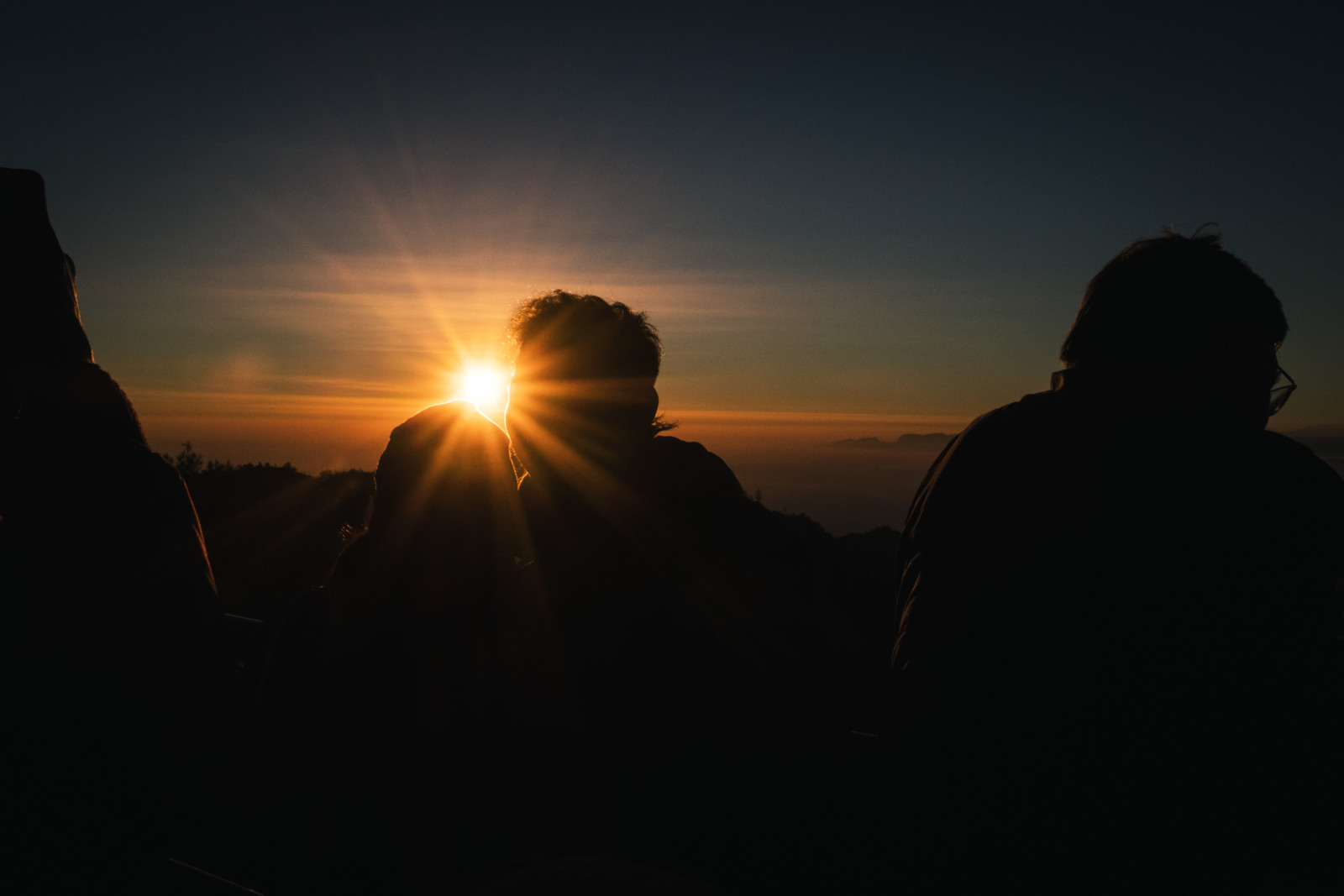 Nonetheless, witnessing the sunrise was a really magical moment. There weren’t any clouds that could dimish the view and soon the sun began to enlighten the whole area.

It is a landscape formed by the volcano and although there isn’t much vegetation, it is beautiful and fascinating in its own way.

At least, most of the tourists are leaving very early and that gives You the opportunity to get some shots of Your own and trying out different perspectives. 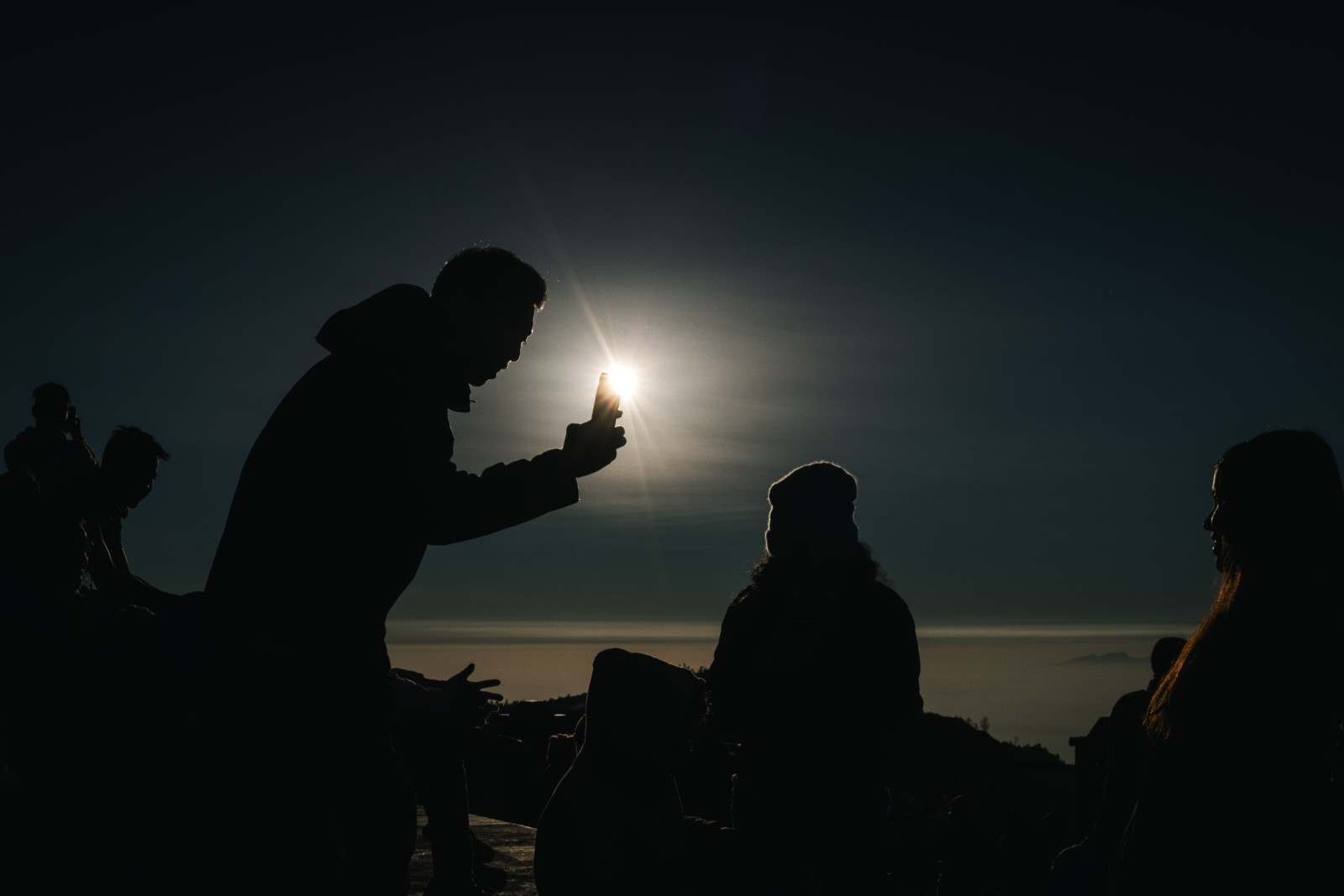 To me, not only the sunrise but getting some good shots against the sun paired with some silhouettes were a goal of mine. Where else would You get such a unique opportunity?

Stepping into the desert

Unknown to me, part of the program of the Bromo experience is not only seeing the sunrise, but also going down the valley to take some pictures, or simply seeing the mountains from different perspectives. 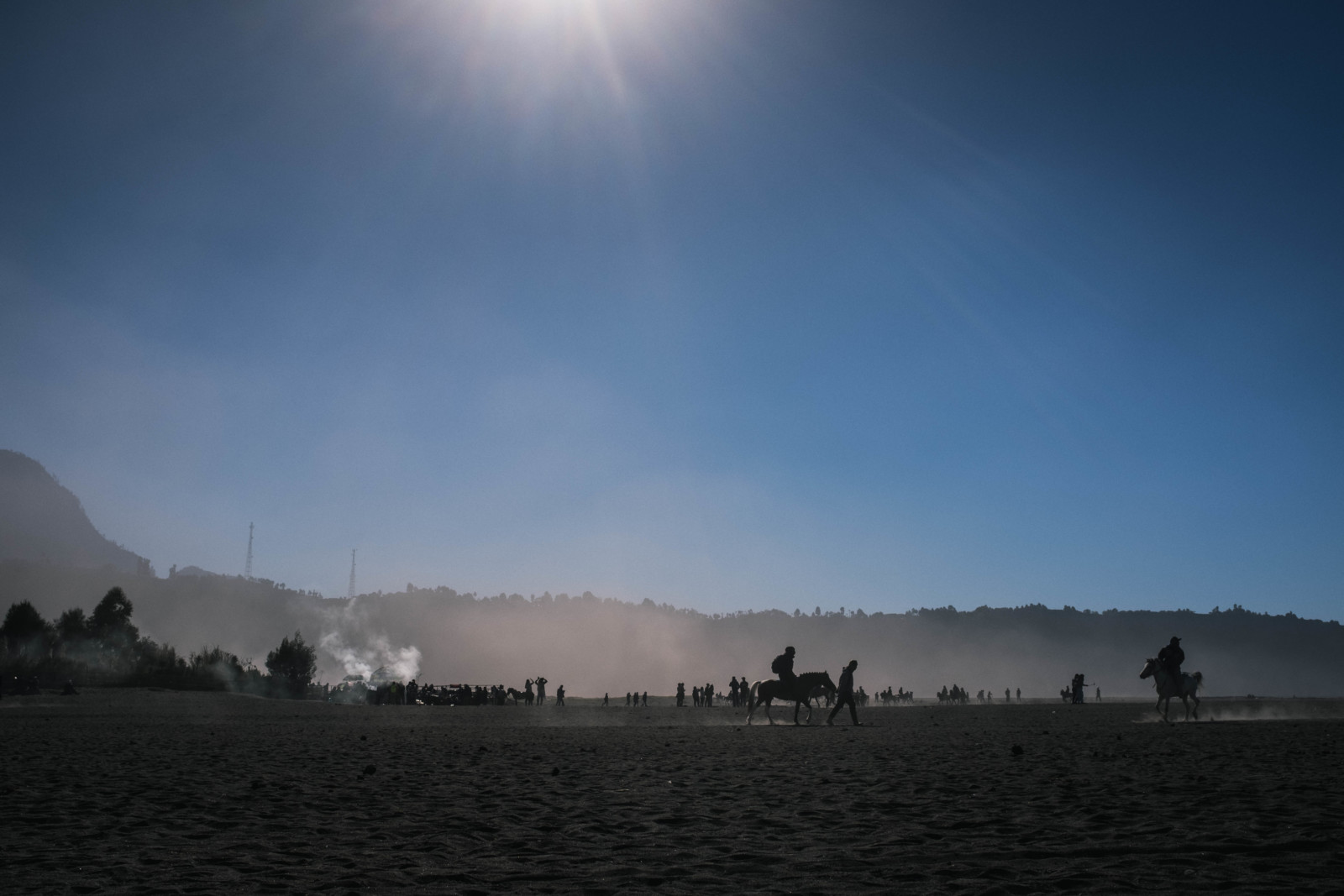 The landscape down there was an environment I have never witnessed before. With the usual hot sun hammering down, I felt like being in some desert, but at the same time, the dust created an atmosphere on its own.

It felt like being in a Mad Max movie and there were not only jeeps and motorbikes crossing this “desert”, but also horses that were transporting some of the visitors. 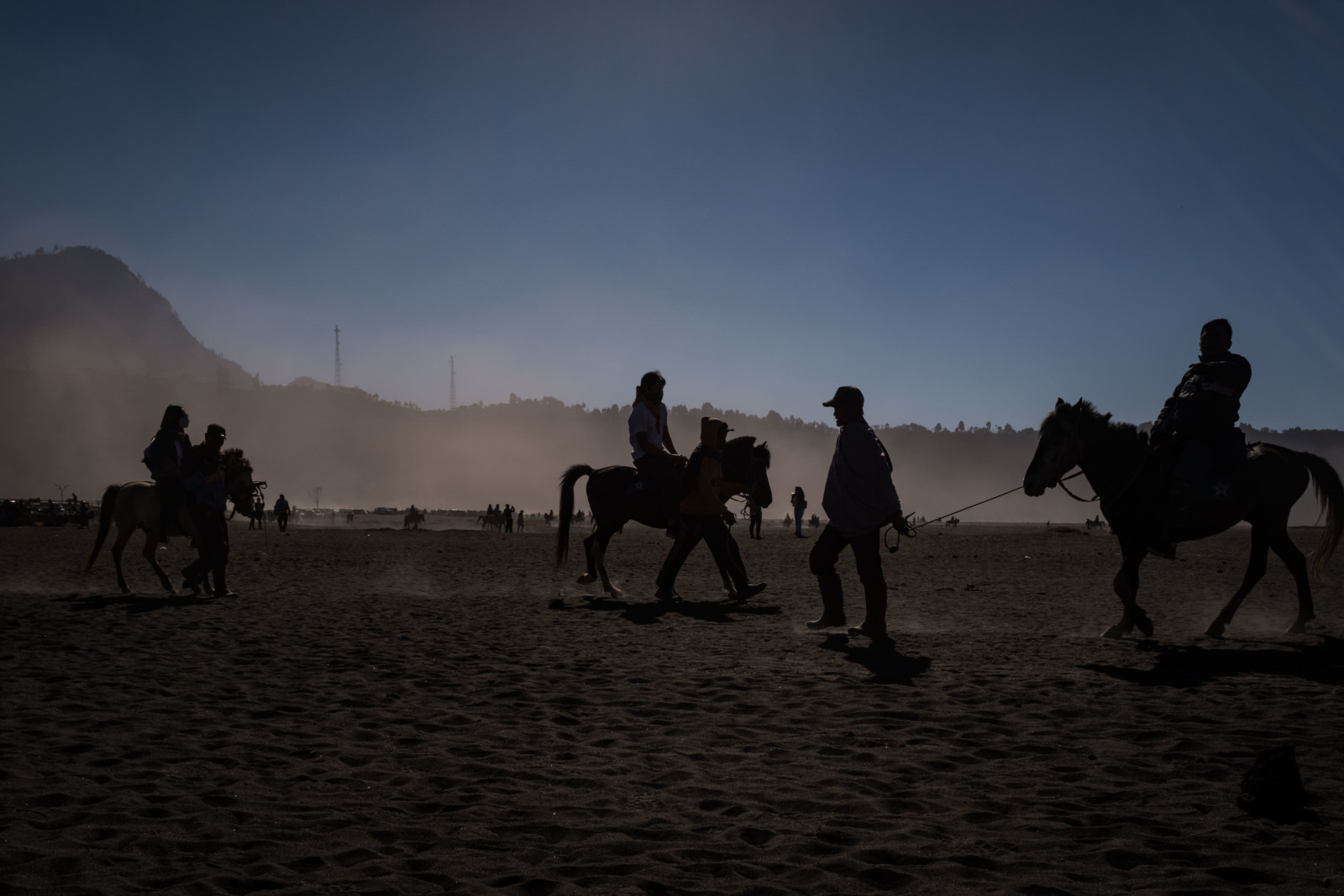 This was just one of the small trips that You should do while You are passing Indonesia, but to me, it was definitely one of the best memories. The whole tour is not really effortless and especially the hot sun took its toll on me since the cars have no air conditioner.

But overall it is probably one of the best places to see a sunset, I would only prefer to do it during the week to have a little more privacy. 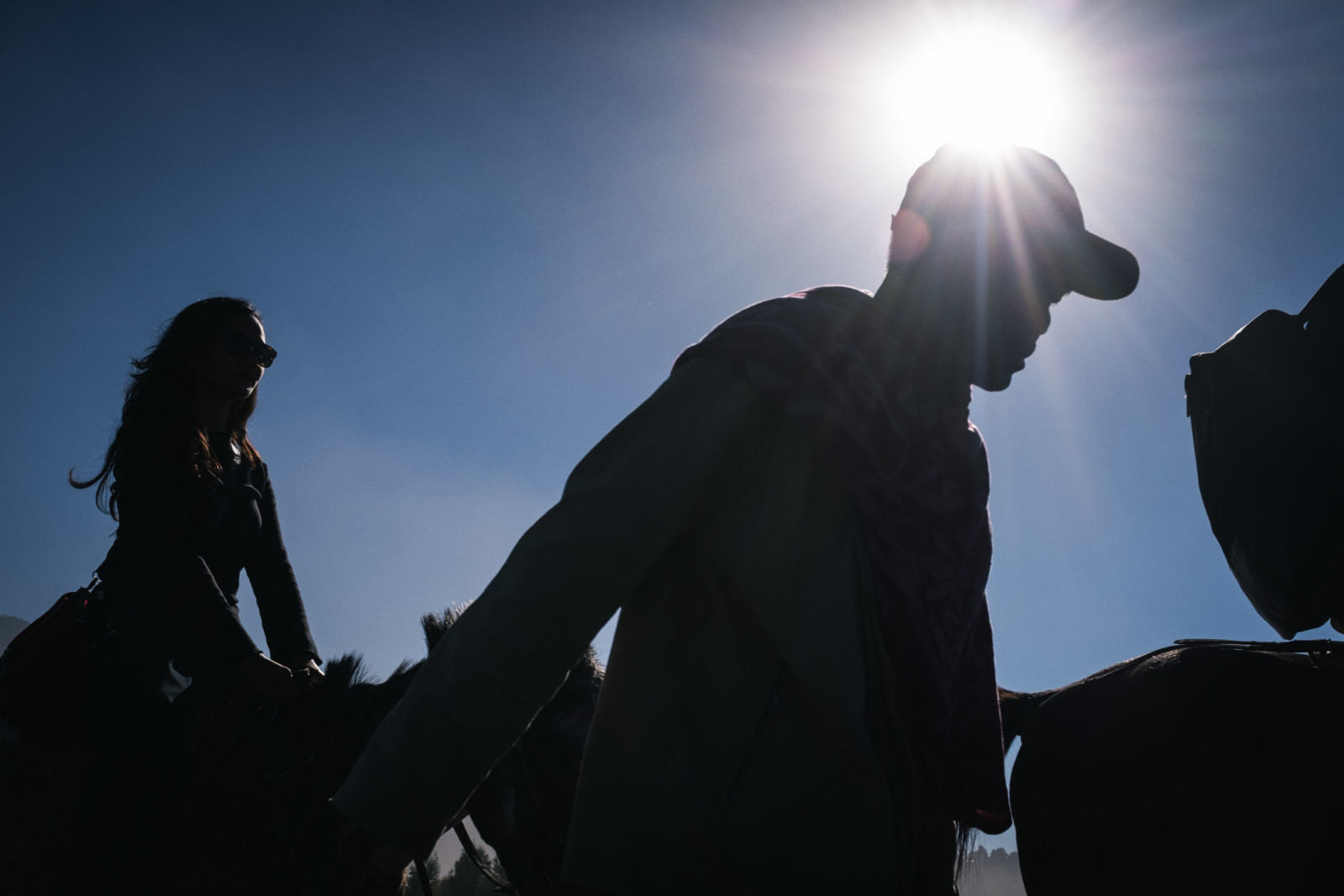 The costs are not really high and can start from 50$, including the transfer from Malang which takes around 3 hours, the entrance fee and drive back to the hotel.

Make sure to get some rest on the following day though and don’t plan Your trip too tightly or You will have a very stressful time.

As far as the gear goes.

I was happy to use my X100F again and it proves to be a great choice of a camera again and again. For the desert, don’t take Your best clothes, as they will be dusty anyway. Some good hiking shoes are recommended, but the mountain itself is very well developed.

Have fun exploring Indonesia, or wherever You are and enjoy these photo moments.