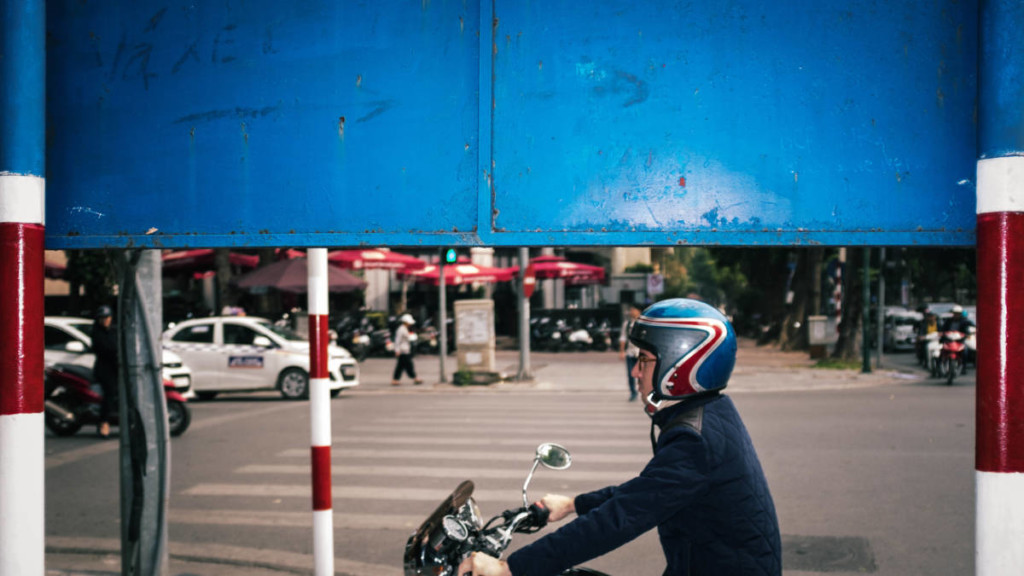 Being in Hanoi for about 2 weeks now, I want to share some of the lessons I learned while living in this tremendous city. It is hard to describe the atmosphere in this city, even through my Street Photography I feel it doesn’t even come close to the feeling that I have while walking through the Streets of Hanoi.

Hanoi is a great place for photography and 2 weeks are by far not enough to explore all of its small alleys, markets, and people. To thoroughly experience this place I needed a few months more and then this city would have still enough left to keep me interested.

Or the city would have changed so much, that there would be new corners to explore.

Hanoi seems like the crazier fast growing little brother when I would compare it to Berlin.

Berlin is often seen as a very “hip” and trendy fast-changing city with a lot of different cultures and nightlife. Hanoi tops it all. From the Hoan Kiem Lake at weekends to the different architectural influences & to the food. Influences of American and French culture are deeply ingrained in Hanoi. Yet Hanoi has retained a unique style that makes it very attractive for Street Photography.

Hanoi is chaos, change, and life. A beautiful combination for Street Photography, although all the new experiences can be very overwhelming at first and instead of taking pictures I am finding myself soaking up what is happening around me.

Slow and Steady wins the Race

The first thing that I noticed when arriving in Hanoi was the crazy traffic. Even for Vietnamese measures, the traffic is pretty out of hand. My apartment was near the infamous “Le Duan” road which is one of the main roads in Hanoi connecting the train station through its center.

Crossing the streets is a whole experience in itself. There are traffic lights, although they are very few and not always respected by the motorbike drivers.

To cross the street I tried to copy a local who was just crossing the street as well, which lead me to the first thing I learned in Hanoi.

The traffic will then pass by you and you find yourself as part of the “flow” that is the traffic of Hanoi.

Similar to Street Photography, confidence and a clear direction are important to reach your goal. Furthermore, Street Photography is not a sprint. If you try to pass by without keeping an eye on the flow, you will die.

Street Photograph won’t make you happy if you expect the results will be coming in just in a matter of days or weeks. It is a constant hustle and change throughout your life. 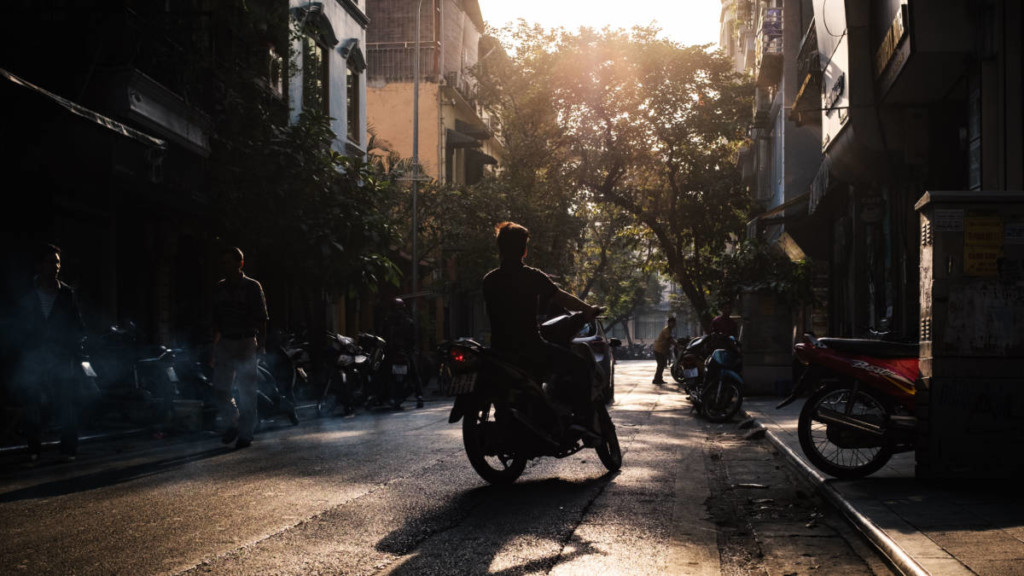 Order in the Chaos

The second lesson is also derived from the insane traffic in Hanoi. When you look at the stream of vehicles, motorbikes and even vendors transporting their goods, it seems to be just one chaotic mess.

There are no lanes, no rules to follow and everyone is just minding himself. But this notion that everyone is keeping an eye on himself and his direct surrounding allows for the mass to function properly. Although it seems very chaotic at first, there are quite simple rules that bring order into this chaos.

As a Street Photographer, I believe it is also my duty to bring order in the photographs that depict the streets. When entering the city of Hanoi first, it was like a giant chaotic population of vehicles and people swarming into every direction. A few days or even weeks are by far not enough to understand the inner rhythm of the city. But there are moments of “clarity” where I am able to sort this mess and express this movement into my photographs. 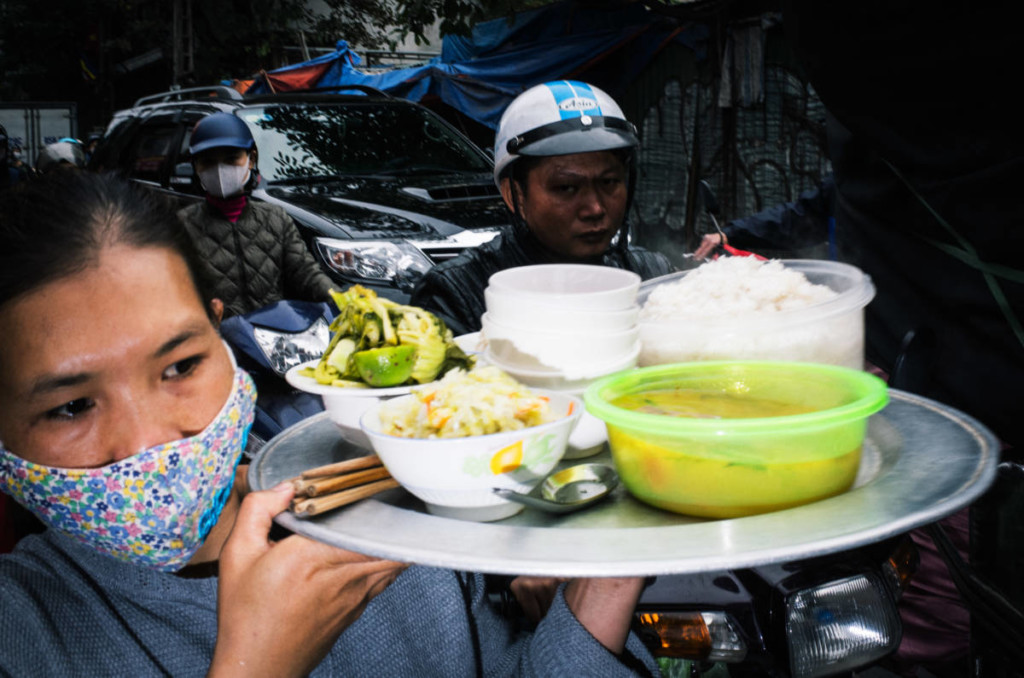 Street Photography in Hanoi is family

Even before arriving in Hanoi I felt like at home and welcomed with a hospitality that I couldn’t imagine before. Getting tips for the best locations and receiving help wherever I needed some.

Meeting Chu Việt Hà was like seeing an old friend after some long time. He showed Hanoi in a way that not even local guides would be able to show. Places that I would have never discovered myself became like a second home.

Later on, I also met the whole Fuji X crew that welcomed me into their circle. Not only photography was part of this meeting but also unique experiences apart from shooting at the street – eating extraordinary food, a lot of beer and laughter.

The Street Photograph community around the world is really special and everywhere feels like home when you are surrounded by such great friends.

Keep sharing the Street Photos, discuss your views with people all around the world. The world is becoming one global street and it is great to be welcomed anywhere in the world.

Photography is a universal language

Being invited to a Fuji workshop by my friend Chu Việt Hà felt a little strange because my Vietnamese is very limited or non-existent I should say. Nonetheless, it was quite the unique experience that I don’t want to miss.

Sitting there for 90 minutes and not understanding a single Vietnamese word was still more interesting than some of my university classes.

Then again, it wasn’t hard to follow the lecture from the workshop tutor as they were talking about composition, post-processing and general qualities of the pictures.

Surprised by the style I figured that the pictures that were this morning by talented students would also be very successful in Berlin. Photography is a universal language that knows no boundaries.

Aesthetics are very similar around the globe and what functions in my familiar location also works 8.000 miles away.

Talking about photography doesn’t need many words. The understanding is mutual and points come across very clearly between photographers even then they don’t talk the same language.

Street Photography should address not only the eyes but also the olfactory sense and you should be able to find yourself right in the scene.

Hanoi is a city that is almost overwhelming in its own smell and noise. I can get easily lost in these impressions with no clear distinction. Everywhere you go is that mixture of the local soup smell and motorbike gas. At least this is what I figured out to be the “odor of Hanoi”.

After being accustomed to these first impressions there are still distinctions in all that white noise.

Maybe around the corner you can smell fish, or hear the sound of some karaoke party.

As a Street Photographer, I walked through Hanoi without a clear destination but have been led by all the interesting people, symbols, and details. Funnily enough, I also ended up going in circles in the Old Quarter of Hanoi without noticing. Nonetheless, I believe that this time was well spent since there must have been so many new things to discover that I didn’t even realize that I was there just minutes before.

Always keep the Attention up

Another lesson from the hectic live in Hanoi is to always be on the lookout for motorbikes, cars or interesting things to see.

I always keep the premise that I was a Street Photographer need to be in the “zen-zone” even when wandering the streets in Berlin.

This notion is even truer in Hanoi and can not describe how many interesting photo opportunities I missed because I was exhausted by all the things going on around me. Don’t numb your senses by checking your smartphone every 5 minutes or controlling the past photographs you have just taken.

Instead, focus on the street and the surrounding 100% of the time and you won’t have so many regrets missing photography opportunities when your attention is on the street all the time.

In Berlin, I can get away with a few minutes of slacking because a lot of the time the street isn’t really a filled space. Hanoi is really different as there is something happening every second you are out.

On the other hand, this means that pauses are mandatory. It is better to be fully concentrated for 2 hours than dragging it out to 3 hours while not being at full capacity. Luckily, a good Pho – traditional Vietnamese noodle soup – can recharge your batteries very quickly. 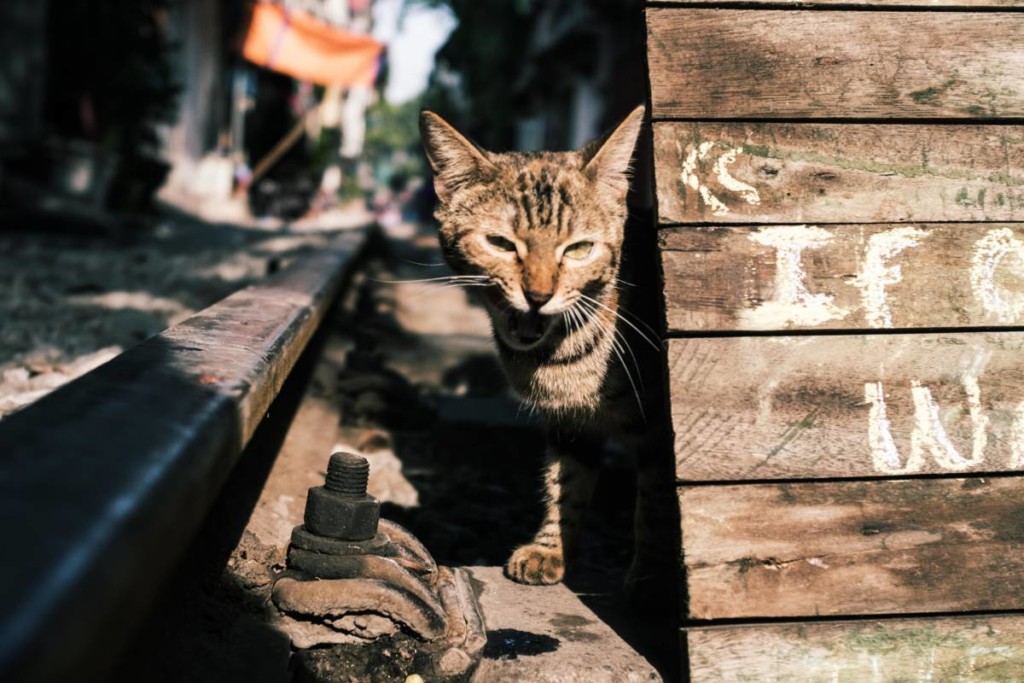 Life can be simple

The most important lesson I learned was to be more relaxed. In Berlin, Germany or probably the western world, in general, we are worried constantly. Paying the rent, moving up in your career or fulfilling social expectations can be depressing very easily.

In Hanoi, I have the feeling that everyone can more easily show his character. You see people walking in their PJs on the street or fully dressed up, whatever they like, they can do.

Wake up early, have a break around noon enjoy some meal of the delicious and affordable street food with your friends and life is all good. You don’t need an expensive car when a motorbike can get you anywhere too. Why need a fancy apartment when you are out most of the time anyway? Life can be simple if we want it to be. Don’t get lost in the career pressure if it isn’t what you want from life. Rather create and do what makes you happy.

Street Photograph is difficult, but we don’t need to make a science out of it. Sometimes it can be better to just take a few steps back, just go out on the street and shoot whatever you like without overanalyzing everything.

If you have an idea in mind or a project that you want to realize, go for it and do it. Don’t worry too much about it.

Go out to shoot, create and simply do.

The world is a free place where everyone should be able to the lifestyle he desires, not that he feels pressured into.