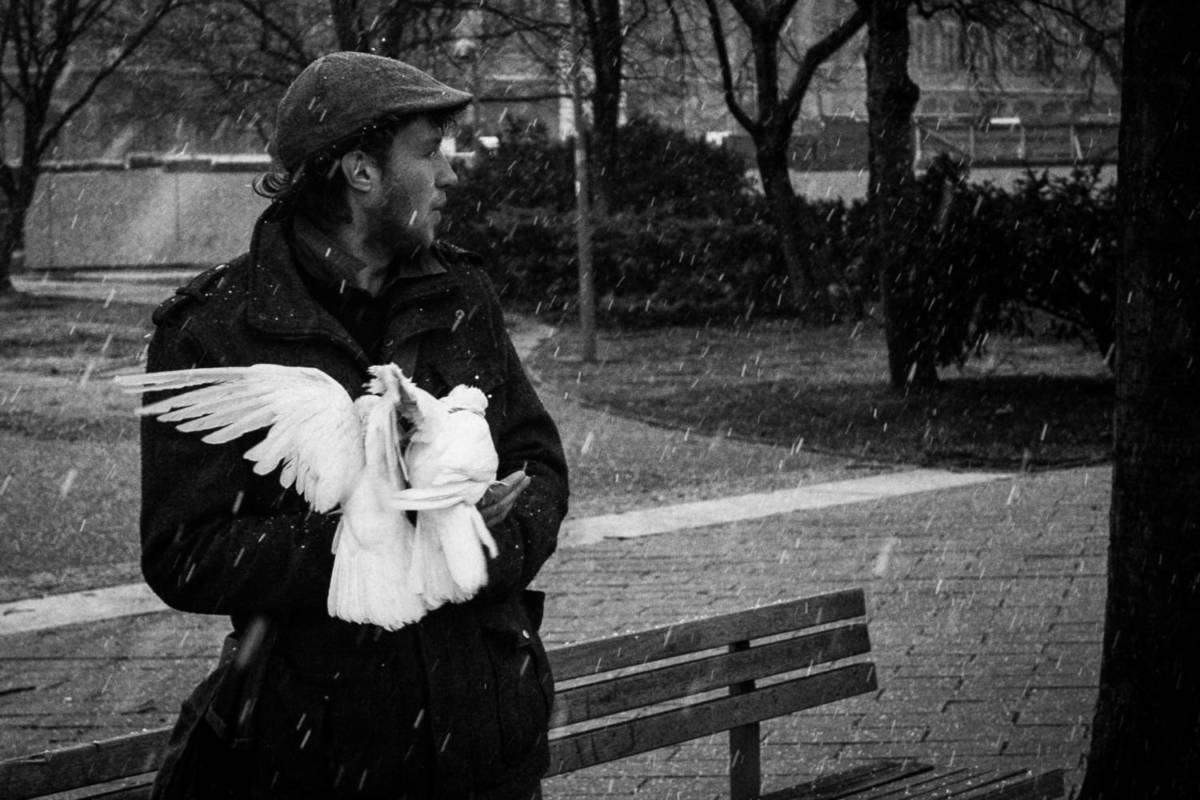 So until this point, I wrote a bunch of articles on the topic of Street Photography. Whether they were focused on pictures or the mental stresses of Street Photographers, they all were under the same topic, that I didn’t define yet or explained what this genre means – at least to me.

Basically, this means that any photograph in public that involves some kind of human element is a street photograph. This also shows that we don’t need to take this term literally. The “Street” can be any public space whether outdoor or indoor, like a museum for example.

The Purpose of Street Photography

What’s the use of Street Photography? In general, we want to document the contemporary life. It is a record of the human life of this very timespan and future generations will look at today’s photos like we look at photos from the 1950s. A lot will change and who knows what might be of interest from modern photography? Maybe people will be confused with the heavy use of cell phones and people looking at displays, or they are interested in modern fashion and how people dress. Vivian Maier is a very popular figure of Street Photography and even known amongst people that have absolutely no interest in this kind of Photography otherwise. But even they like to experience the life of Chicago in the past through her photos and appreciate the work she did. Without the work that we invest today, there would be no outcome in the future and photos can “mature” through the decades and become increasingly interesting in the future.

There are a lot of uncertainties and no one can predict how the future will look like, but most likely people will still be interested in human life from the past. If Street Photography wouldn’t exist, the documentation of modern life would be based on countless numbers of selfies, which only tell part of the story of today’s life and can’t be representative for a whole generation.

Of course, we have to be realistic and if only a handful of pictures will be some sort of relevant in the future, this is already a great quota – given the mass production of pictures today. Therefore a lot of motivation simply stems from creating pictures that tell a story and are beautiful to look at. These pictures provide entertainment to the viewer just like a good photography book or painting does. I put a lot of value in the documenting aspect and therefore I believe that a picture should be candid and unposed to qualify as a Street Photograph. If our goal is to photograph the human life on the streets of today, we should interact as little as possible before taking the picture. Otherwise what we photograph isn’t the truly human life, but a show people put on in front of the camera.

By this definition, in my opinion, posed street portraits don’t qualify as Street Photographs because they aren’t candid. They are spontaneous outdoor Portraiture Photography and unable to document the real life.

Since the human life plays a big role in Street Photography. Does that mean that a  photo needs people to be labeled as a true Street picture? In my opinion, not every Street Photograph needs visible people to count as Street. It is more about documenting human life or the modern society and as such symbols of the aforementioned are also suitable to represent today’s life.

Pets are often seen as a representation of their owners and therefore pictures of dogs or cats can also count as Street Photographs without directly showing humans. Other examples can be shadows, waste or media like magazines, that show to some degree what our modern society is interested in and what headlines were of importance. This is one of the most notable differences between Photojournalism and Street Photography. Although the latter is sometimes described as some kind of journalism to make it appeal more seriously and raising the standard, they are still two different kinds of things. Photojournalism has a higher topic and every photo has a connection to this topic and is related to each other. They serve to tell the complete story and often are accompanied by a written text that helps to understand the context of the pictures.

Street Photography, on the other hand, doesn’t have a cohesive topic. Usually, people just photograph what they are interested in. Over time they might develop an individual style and their particular interests are shown in their body of work, but that doesn’t mean that they tell a story from beginning to end. Every picture counts individually and stands on its own merit. Ideally, a Street Photograph shouldn’t need a written description and if it does, it probably lacks in storytelling or other departments.

Street Photography is the documentation of candid human life to the public expressed by single pictures.

Now that I described what this genre means in my eyes, this shouldn’t narrow your way of working. If you like taking posed street portraits you should continue to do so. As much as I narrowed down, what disqualifies as Street Photography, there is also a lot of room for innovation and displaying the human life that is often overlooked in today’s photography. Exploring different genres can also open the mind to different views in Street Photography and thinking in stereotypes isn’t helpful either if you like what you do.